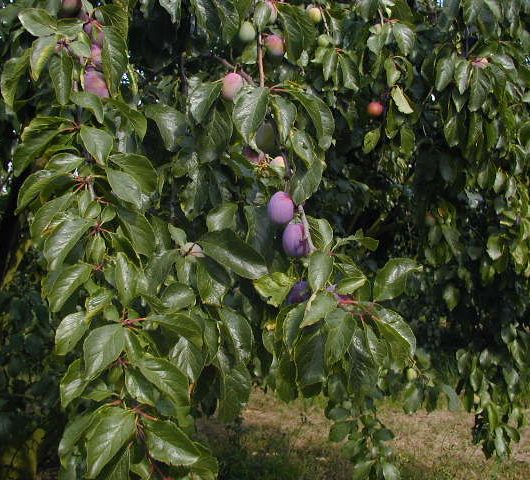 The Victoria Plum Tree is a self fertile standard with white blossom and a large cropping of bright red oval fruit with sweet juicy yellow flesh in August. A good eater and wonderful for cooking.

A small to medium long-lived slender tree. Victoria plum trees are a safe bet. A self fertile standard with white blossom in spring producing one of the best known eating plums in huge quantities in August. Victoria plums are sweet and juicy and are excellent for cooking, jam making and desserts. Famous for breaking under the weight of their crops – you will get much larger fruit (and still plenty of them) if you pick over your Victoria’s when they start to form, removing every other plum. Don’t be scared, some people take off 2 out of 3.

Victoria Plums grow best in sunshine and like a heavier, rich moister soil than many other fruit trees but do not relegate it to some damp site with heavy soil. Protect the blossom in spring from frost and weed, mulch and spray with seaweed solution. In autumn remove all mummified fruit. Plums are susceptible to silver leaf disease so pruning should be done in late spring, summer and during dry weather. Once the head is formed only cut out dead or diseased wood. Being a prolific cropper, branches over-laden with fruit might need propping up. They are prone to disease but their prolific cropping far outweighs this problem. The blossom is beneficial to bees and insects and fruit is loved by birds and other wildlife.

History: The European plum, Prunus domestica is thought to be a hybrid between P. cerasifera ,the Cherry plum, and P. spinosa, the Sloe. It came from Western Asia and the Causcaus. From Syria through Greece into Italy and hence via Rome to Britain and Northern Europe and then reintroduced again in the Crusades. Both Henry VII is said to have imported a ‘Perdrigon plum and there is a plum grown from a stone salvaged from the wreck of Henry VIII warship the Mary Rose.